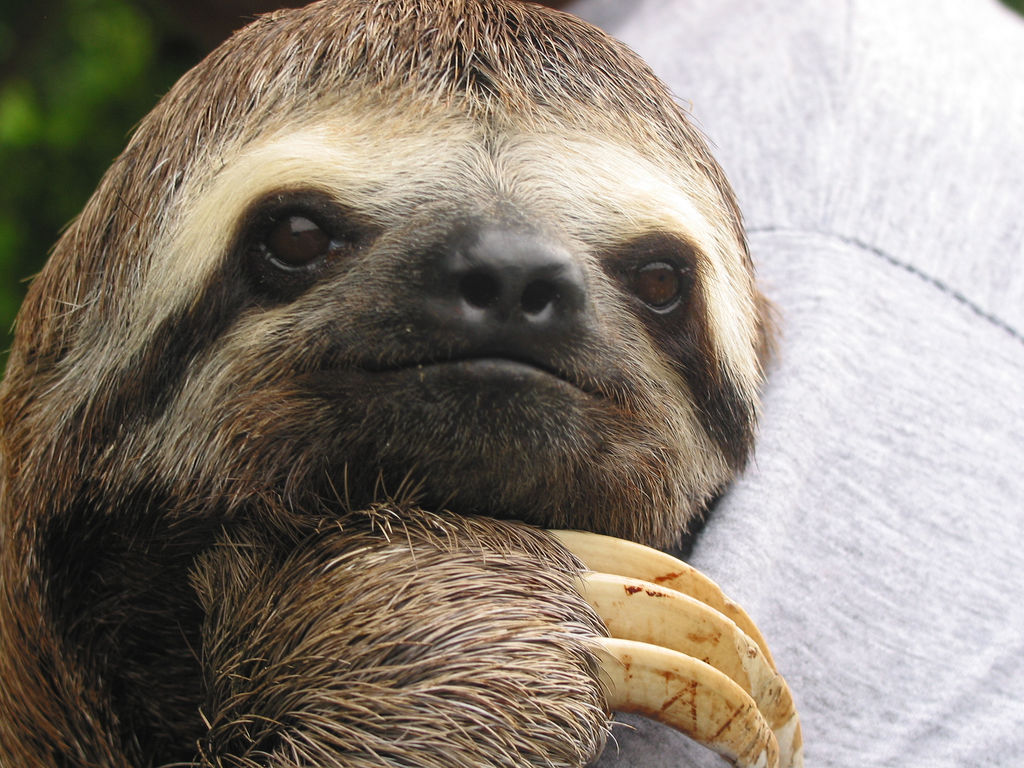 When we think of Sloths, we are normally reminded of a mammal that is very slow and spends most of its life hanging upside down from trees. Sloths primitively originated in North America, but are nowadays naturally found in the tropical rainforests of South America and Central America.

The name ‘sloth’ is related to the word ‘slow’, and that name was given to them due to their very low metabolism and slow calculated movements. This is the product of an evolutionary adaptation which panders for their low-energy diet consisting of leaves and is also a way of avoiding exposure to certain predatory organisms such as hawks and cats, which investigate their prey using sight.  Considering that sloths are almost helpless on the ground, they, however, are able to swim, and actually manage to move faster in the water than they would on land. By slowing down their heart rate, they can hold their breath underwater for an impressive 40 minutes.


The long hairs of the sloth’s ragged coat is a host to green algae which helps the sloth camouflage itself in the trees and provide nutrients to the sloth. The
algae, in turn, receive shelter and water from the sloth’s fur. The relationship that the sloths have with the algae, seeing as they are both benefitting from each other, is known as a symbiotic mutualistic relationship.

A sloth’s diet consists mainly of leaves. Seeing as they are herbivores, they can be found eating anything between leaves, buds, twigs, fruits and occasionally,
insects and rodents. They can, however, feed on over 50 different types of tree in the American tropical rainforest, but the cecropia tree species is by far their
favourite.

Sloths particularly enjoy the tall trees found in rainforests. Sloths also prefer sleeping while curled into a cosy ball on clusters of leaves found on tropical trees. They also like to sleep hanging by their claws from tree branches, and in fact spend up to 90% of their lives doing so, seeing as they sleep for up to 15 to 20 hours a day. Sloths can turn their head on a 270° axis due to the fact that they have extra vertebrae at the bottom of their necks. This enables them to obtain an almost 360° view of their surroundings, which proves to be a highly beneficial defensive mechanism for their survival. This unique characteristic makes the sloth species stand out from other mammals whose bone
structures do not allow for this movement.


Even though the modern sloth is usually not found any larger than the size of a medium-sized dog, extinct sloth species include many forms of ground-roaming sloths, some of which attained the size of elephants. The facial structure of a sloth gives the impression that it is constantly smiling –even if it is experiencing pain, stress or anxiety. When sloths are cruelly used as a photo prop for wildlife selfies, tourists may accidentally confuse this feature for happiness or contentment, when in reality, this is not the case at all.

Below are some links to petitions to protect sloths and other wildlife creatures from exploitation: